Not a single botanist can name the exact figure of all plants. After all, from time to time they find a new plant that is not like any other known plant. And each of them finds a worthy place, if not in the garden, then in people’s housing. So in vertical gardening – even fruit trees become part of a specific vertical gardening called palmetta.

Not only vines can braid retaining walls. In addition to them, trees, bushes, plants in containers participate in the vertical gardening in the landscape design of gardens and parks. Palmetta is a specific way of forming bushes, shrubs and trees in one plane. Apply this method only on young plants. But what is the effect !!! Not many private gardens can boast apples or peaches ripped from the wall. Palmettes can be formed freely or according to certain rules.

Palmettes are also arranged on a rigid flat frame. In this form, they are made to create hedges or labyrinths. The range of plants used to organize palmettes is very wide – from a variety of bushes to fruit trees. The only “but” – palmette requires a lot of space and timely trimming. 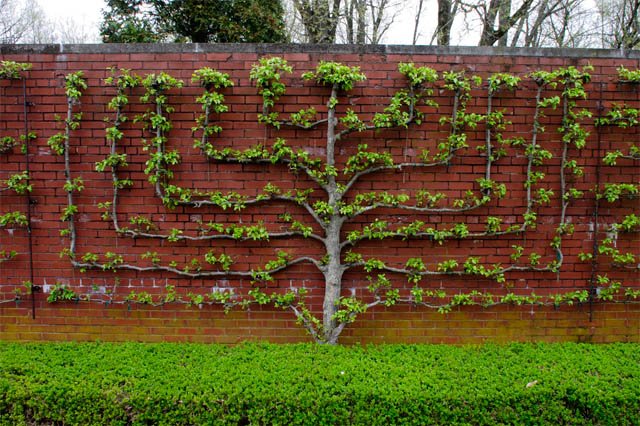 Bushes and trees are actively involved in vertical gardening, both independently and in groups. They become a background that you can’t do without if the landscape design of the neighboring plot does not harmonize with your garden. And this is quite real even on a summer cottage of 6 hundred parts. In a group planting, bushes and trees will become a flowerbed requiring a minimum of attention. Weeping forms of plants will decorate any area. Japanese quince will become a beautiful palmette hedge – in spring it will delight the eye with beautiful flowering, and in autumn with yellow-green fruits and their wonderful smell. Certainly, these same plants, but planted in containers, are also part of the vertical landscaping.

By the way. When you really want exotic, apricots, peaches, olives, lemons, figs and other plants growing in tubs, they will be an excellent fence for the terrace. And in the cold season, verticals inside the house or apartment will be decorated.

In landscape design, several dozens of palmettes are distinguished. The main differences between them:

Free palmette has a well-defined central conductor and many variations regarding the number of tiers and the location of branches. 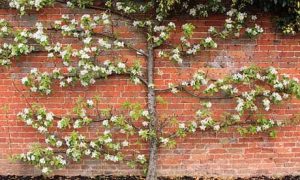 The Italian palmette consists of the main conductor and opposite branches, extending from it at an angle of 45 degrees. 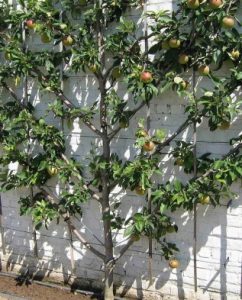 A single-tier palmette consists of only two skeletal branches.

The combined palmette is characterized by a spindle-shaped crown.

The Hungarian palmette resembles a spindle-shaped bush in the plane, and when viewed from the end part, a truncated pyramid. 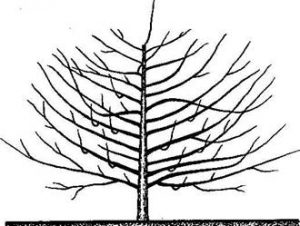 The fan palmette has formed branches located loosely in the form of a fan. 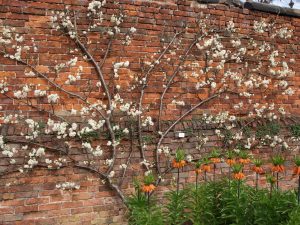 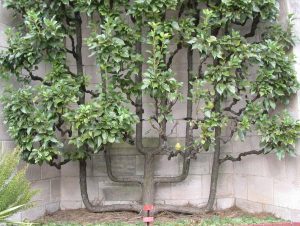 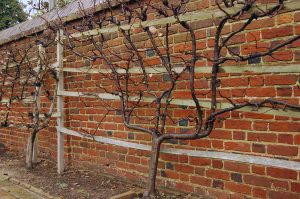 There are still complex palmettesthat form geometric or arbitrary patterns. They require attention and painstaking performance. 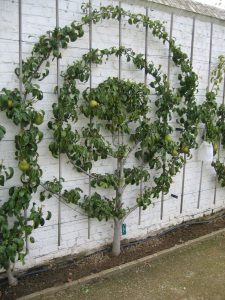 Palmettes using cordon technique are formed as freestanding hedges. There are vertical, oblique or oblique, horizontal and wavy cordons.

If you decide to create a palmette, then start with the selection of seedlings. They should not have overgrowth, disease and damage. The optimal age of the seedling is 1-2 years. It is desirable that the stock is dwarf or dwarf. We make landing in the fall. The first pruning is done in the spring. The formation will depend on the type of palmette that you have chosen. Of all the shoots that appear due to branching, only three are left – a conductor and two side branches. And then, we repeat, it all depends on the type of palmette.

It takes 5 years to form palmettes. What does it depend on? There are several dependencies: plant, palmette species and your patience. The plant growth rate will determine the molding speed. Sophisticated palmettes will also take longer to complete. Sometimes they are set a difficult goal, but patience can end in the middle of the case. Get it and everything will work out!

itself is already of interest. To make it more interesting and colorful, one can not help but recall ampelous plants in vertical gardening that complement the entire composition. Not a single city can do without them, not a single garden or park. In summer cottages, gardeners decorate old stumps with potted plants, hang pots on branches, and decorate the walls of houses with them. And in cities, ampel flowers you see every year on the lanterns of the central square. And, as we already mentioned in one of the articles on vertical gardening, hanging plants will be a wonderful addition to palmettes, if they are embedded on the upper parts of retaining high walls and decorated with windows twined upward / horizontally / diagonally.

Vertical gardening in the landscape design of gardens is manifested not only by vines, but also by trees, bushes, plants in tubs and ampelous plants. It all depends on the ideas of the master and the style of the garden. Somewhere, green verticals hide a nook that can be created using vines or a group of trees and bushes. Somewhere trimmed bushes divide the garden into zones. And in the garden at the cottage, due to lack of space, the amateur gardener decided to create palmette from the apple variety, which he liked very much. He just did not have enough space in the garden, and the wall of the house was unsightly. Without knowing it, he combined business with pleasure: delicious apples hid a plain wall. However, we recommend that you carefully plan your garden before planting plants. If it is not possible to land and build everything conceived at once, then the preliminary plan will help to avoid many problems.